Absenteeism and a Shift in Perspective

So it has been a very long time since my last post. I know that I have at least one message to reply to and I have been very poor at doing so.

What has been going on since my last post? A lot of things. I won't go into painstaking detail. I had to adjust to being a single parent.  I had to finish out last school year which I managed to do fairly well. It was the first times that I actually didn't have IEPs to bring home with me during the summer. I did some per diem work during the summer and then started the school year.

I have been extremely fortunate to have so many wonderful people in my life. In addition to the wonderful support that I have gotten from my friends and family, my coworkers were also incredible.

At first, keeping up with this blog did not seem important anymore since I had so much else to do. My heart was just not in it. Then as my life began to settle down, a wondrous thing happened.  I found happiness again.  I could go through a whole thing on the grieving process but I won't. But I'll say it again, I found happiness.

Even after I was happy again, I still didn't feel the need to come back here and write.  A few months ago, I began to examine the reason for this.  I started examining this because a very special person in my life asked me why I stopped writing it.

So the conclusion I came to had to do with a shift in perspective.  When I seriously started the blog, things weren't going well in other areas of my life.  Work was the only area where I felt competent.  Work was a refuge...not that I tried to disappear into my work and remove myself from the rest of my life...but my hours at work were a distraction from the other areas that weren't so good.

Now that my personal life is better, I don't need work as a refuge.  While I still want to be good at what I do, being a school psychologist isn't as much of a defining attribute.

I don't know if that sounds lame or not but that was my conclusion.  I could provide other examples as proof of this but I think I'll leave it at that for the moment.

Where do I go from here?

I'm planning on posting again on the site. I know that I'm not even going to try to keep up the rigorous pace I foolishly attempted to do before.  One post a day was just too much and, now, I don't think my professional life is that interesting (Do I know how to promote myself or what?).

To the person that sent me a personal message, I will get back to you soon, which is kinda relative considering how long ago that message was sent.

I think my next post or two will have to do with changing tests and the use of technology in the workplace.
Posted by NiallNai at 11:04 PM 9 comments:

On February 25th, 2011, after fighting metastatic breast cancer for less than a year, my wife of 8 years passed away at home.

The months leading up to her passing were not easy as her condition continued to deteriorate.

I hope to be able to return to this blog but I know it will not be with daily updates.
Posted by NiallNai at 9:20 PM 3 comments:

I just tried to put my name into the school information system.  I'm losing it.
Posted by NiallNai at 10:44 AM 2 comments:

Trying to get back on the horse

Well, it has been a while since a proper post.  As I noted, a lot of personal life stuff has been draining me which has led to my break in posting.  I'm going to try to hit some of the highlights since I returned to work from winter break.  Sadly, the unaccounted days from before the break are lost to the mists of time.

Fortunately for me, I closing in on the tail end of the re-evaluations from my own caseload.  Soon, it will just be initials and my coworker's caseloads.  I'm also fortunate that I've been keeping ahead of my IEP meetings.  I have all the meetings for this month already scheduled and next week I'll have to work on next months IEPs.

For most district, entering the new year means the beginning of IEP season.  From about late February to May, the majority of IEPs come due.  This is usually because IEPs have to be changed or adjusted to account for teacher recommendations for classes, which also come due at this time of year.  I'm expecting to have to amend a number of IEPs at the end of the year to account for those students that had IEPs come due in the first half of the school year.  Ideally, this will not pose a problem.

Sorry for the absence.  The week leading up to the winter break was a drag in more ways than one.  The holidays were more exhausting than restful.  And, of course, I caught my son's cold just before going back to work today.  So I am feeling really lousy and plan to get some rest.

More tomorrow, if my head and joints stop aching.
Posted by NiallNai at 9:04 PM 1 comment:

So yeah, I flaked.  It was a long week and I've been exhausted and recovering from illness.

On Thursday, I had several meetings to plan re-evaluations.  No parents showed up but I managed to obtain participation by phone for both of them.  The rest of Thursday was uneventful except for an extremely generous and unexpected gift to me and my family from everyone in the department.  While I have alluded to dealing with some personal problems in my life, I may as well say it here now: my wife was diagnosed with stage four cancer in April of this year and it has been progressing rapidly despite treatment.  That is who I was with at the hospital last Friday.

My coworkers have been extremely kind and supportive of me and my family.  Even I am anonymous on this blog, I do want to say that I really appreciate the kindness and sensitivity that they have shown me.

Friday began with my getting lost on the way to an out of district meeting.  It is really amazing just how rural some parts of New Jersey can be.  I finally found my way, after a phone call.  No parents.  No one answered when we called home.  We spoke about the student who had an incident the day before.  The student backed down from another student and lost face and, oddly, wasn't in school today, either.

When I got back to my office, there was a message from the parent saying that their child was refusing to go back to the school ever again and that the parent was in agreement with this, even though they had only gotten the story from their child without talking to the school.  Before I called the parent, I wanted to speak to the school to see if they had spoken to the parent.  I left a message and didn't hear from them until late afternoon.  I was informed that they had spoken to the parent and had an appointment to see the student on Monday at their home because the other parent didn't want the student to leave the school.

This OOD really seems to go the extra mile considering they are willing to make home visits.

That is where my day ended.
Posted by NiallNai at 8:29 PM 1 comment:

Today was the first day that I woke up and didn't feel like something the cat dragged in...and with three cats, that's saying something.

Even so, I had my work cut out for me since I had four meetings to attend at three different locations, all in district.  My first meeting was an initial referral conference for a student that I had done a risk assessment on at the beginning of December.  The parent wasn't able to attend in person and participated over the phone.  When I introduced myself, I said, "You may not remember me but we spoke a couple of weeks ago."  The parent said they remembered my name and would never forget it.  I joked that could either be good or bad but from the tone I sensed a certain amount of appreciation.  I learned during the meeting that the student had been admitted to an inpatient unit.  On the one hand, I'm glad the student is finally getting services.  On the other hand, this student has now started their contact with mental health professional and I don't foresee this ending anytime in the near future.  The student really struck me as having borderline traits and personality disorders are particularly difficult to treat.

My second initial referral meeting at the second school of the day was another complicated matter.  The student is in a foster home.  The child has a very complicated and sad background.  It is a shame.  The one thing that bothered me during the meeting was the teacher who was talking beyond her area of expertise.  The teacher said that perhaps the student is blocking memories.  I don't mind people playing armchair psychologist (hell, I make a living at it) but don't talk about it in a meeting with a parent.

The third meeting was a change of pace: an eligibility conference.  Just prior to this meeting, a downed a breakfast drink for lunch.  The meeting went well and was the simplest of them all.  While the parent didn't want the level of service that was initially recommended, which would have required a complete change of school for the child, the student has been making progress.  With the addition of accommodations and modification, the student should be alright.

My last meeting of the day was back at the second school and was my very own initial referral conference.  This one was the most technically screwed up of the all.  The student had been referred at the end of last school year, just about a year after they had been evaluated by the child study team and found ineligible.  So at the time of the second referral, it was determined that the reports could be accepted since it was within a year and an additional neurological would be done.  Then the summer came and we do not have a permanent team during the summer so there was no one to keep tabs on this.  Add this to the fact that the board didn't approve the neurological evaluation until September and this leads to the current problems.

So at some point during the current school year, someone asks, "Whatever happened with X?"  X being the student in question.  I do some digging and find out that nothing ever happened with X.  I speak to my supervisor because now the old psych and ed are out of date.  I'm advised to treat it as a new referral and do a new psych and ed.  So this is what I do.

During the meeting, I own up to the district's failure to get this done and inform the parent that the evaluations will be expedited.  The parents certainly seem trusting enough and I hope that my manner put them at ease.  We all part on amicable terms.

This brings me to the end of any significant activities for the day.
Posted by NiallNai at 8:03 PM 1 comment:

The Diary of a School Psychologist Bookstore at Amazon 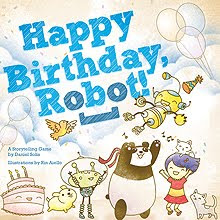